I was born in Greenwich, CT in 1955, making me 64 years old. Interestingly (and proudly), my home parish in Greenwich is also named Sacred Heart, so there’s a real feeling of ‘coming home.’ I am a late vocation. After a seventeen-year career at Pitney Bowers in Stamford, I left the company to attend the St. John Fisher Seminary (then in Trumbull) in January of 1993, from where I (finally) completed my undergraduate degree through Sacred Heart University in Fairfield in 1994. I had studied computer programming at Sacred Heart while still an employee of Pitney Bowes, and made my living at the end of my PB career as a programmer, so I ended up graduating with a Bachelor of Science degree in Philosophy, due to the mixed bag of coursework that I had taken as my career aspirations changed from business-oriented into a priestly vocation.
Then, from 1994 through 1997, I attended Mount Saint Mary’s Seminary in Emmitsburg, Maryland, receiving my M. Div. degree in May of 1997, and was ordained by Cardinal (then Bishop) Edward Egan on May 24, 1997 at the age of 41.
I have had over my 22 ½ years of priesthood a total of seven assignments. First, St. Ann’s in Bridgeport from 1997 through 1998, when I was asked to become the Spiritual Director at Trinity Catholic High School in Stamford. I resided at St. Roch’s in Greenwich for that one-year assignment. In 1999 through 2004, I was assigned to St. Leo’s in Stamford as Parochial Vicar, finishing up my last eight moths there as the Administrator. From there, in 2004, I was assigned as Parochial Vicar to St. Thomas the Apostle in Norwalk, then in 2007, back to Stamford to St. Cecilia’s, then back to Bridgeport in 2009, as Administrator of St. Patrick’s, and finally, in 2012, as Parochial Vicar of Holy Family Parish in Fairfield. Finally, I was asked in 2014 to become the pastor of Holy Family.
Personally, I love photography, reading, and I am a pinned-to-the-wall stereo nut. I have been collecting music for many years, and enjoy a good movie. I love traveling when I can afford it, and (I hope this doesn’t alienate all you Boston Red Sox fans…) the New York Mets.
Through the intercession of the Blessed Virgin Mary, I pray that Sacred Heart Parish grows in holiness each day. 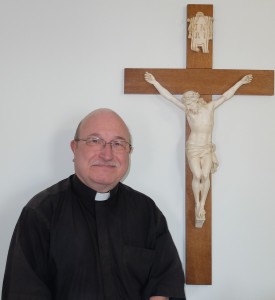